Mom Are You Going to Die 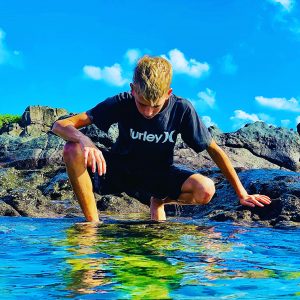 Casey needed to see the kids, and the kids her—the doctors said so. It was day two, all of it happening fast.

To offset the Leukemia’s blood cell blast, only saline was going into her bloodstream rather than chemo just yet. They could not even administer proper medicine until diluting the cell blast itself, which was immediately threatening the shutdown of her organs—she would not survive chemo under her current status, though chemo was what she needed to be saved; thus the plug of saline to simply dilute the cancer for now. Our kids, I knew, were driving by van to where we were at the Pali Momi Hospital, and I tracked them by text getting into the lot, onto an elevator, and to our floor.

There came our kids, all 9 ages of them from out of the sliding door at the end of Casey’s corridor. Not a word, not a fearing face, but pointing knowingly to where they thought their mom was probably at. We knew so little, especially them, except that they should come see her right away and share the moment just in case.

Thinking about what to do, what to be like—those were my concerns that the kids soon helped relieve. They each had their thing—a smile, a statement of affection, an assuring show of courage for Casey to see, and a making room for each their siblings to squeeze into the tiny room. Especially the tinier kids were draped in PPE with a face mask too big, gloves too big, gown too big. She was not supposed to be touched, but the whole scenery of a giant family, each making room with each their own gestures, and donning awkward safety-gear… well, the whole moment was surreal and we just waited for someone to say the right or needed thing.

Elijah, 6, will say it. And there was Elijah coming straight through a pathway his brothers and sisters cut for him, right up to his mom. At this point he was going to say it and no one could stop him. Deadpan voice, unrestrained by any of the environment, Elijah walked right up to Casey and delivered his business: “Mom are you going to die.”

It was straight and clean—his question that sounded like a declaration. It was directed straight into each of her eyes and behind them, like into where the truth of his mom was. We all wanted him, right then, to have asked it, like the way he did it, and for someone exactly like him to be the one to ask it, and he had. Immediately it was like we had all asked it, and we waited to hear from Casey the answer to it, like as if now had come the chance to work on healing her or something, if she would just answer it. “Mom are you going to die,” he asked, and for some reason it stands out in my memory as braver and truer words, by Elijah, 6, whose interest for his mom had no other thing tagged on to it but the business she should live.