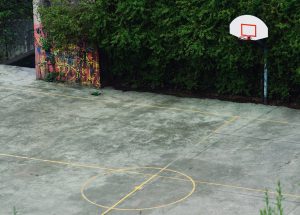 When Casey and I first moved to the Austin area in 1997 we lived in a brand-new apartment complex on the edge of Brushy Creek, and just outside our unit, that same creek had a waterfall dam you could walk on to get to the other side. There was a basketball court on that other side, with a short fence around it, strangely, and in the middle of the day sometimes I tight-roped that waterfall with a round one to shoot hoop by myself.

At nights, however—nearly every night—it seemed there were police swooping in with sirens, lights, and at least a strong argument. We did not know exactly what was going on, usually, but we saw frequent arrests and it was a housing area where almost everyone was Mexican, usually only Spanish speaking, recently from Mexico.

One day I crossed over that waterfall later than usual and as soon as I had started up, a dozen Mexicans arrived with their ball. They took over the court right away and invited me to play with them, and it was thrilling and strange at the same time. It was good hard pushy street ball, and I was not very good and neither were they. That is probably why it was so pushy. A couple short fights came of it but they made me feel welcome, though we could barely understand each other. Talking with Casey about it later, at some point one of us referred to me as going out to play Mexican basketball, since it was so unique between the language and culture differences, and the fact that a creek seemed to stand between two worlds. As this went on, sometimes my brother Dan was part of it too, in fact he might have been there the first time.

If I recall it right, I had changed my schedule up a bit and started to cross over there later in the evenings. Some days later, I saw the Mexicans from across the creek playing again, and instead of being joined by them, this time I went and joined them. Again they were welcoming towards me on that particular night, though a few times I felt like I was about to get hit for a scuffle beneath the rim.

Afterwards we all sat down on the ground and beers were produced and they asked me to join and drink with them. I had spent some time in the Dominican Republic years earlier, and I gave it more of a go that night trying to speak only Spanish. Between what little they could speak, and what I could speak, we figured it out. One of the older gentlemen went straight to talking to me about that side of the creek, asking me if I saw the police there every night, and I told him I did. Most of the others listened in on their friend’s and my conversation, and I also remember that I was very interested in seeing all the different guys’ “place”—as if they knew it instinctively—of where they stood with each other (the #1, the #2, etc.)

A few discussions and a beer later, this particular gentleman communicated to me the question, “How many children do you have?” When I told him none, he seemed surprised, and he asked me how long I had been married and why not. I told him that Casey and I were waiting to get into a more secure situation to start having children, and I told him, “we have no money right now.”

That shocked him, and he let me know it. He was like, “What!” (“¡Qué”), and through our languages he basically said: “Look at where you live,” waving at the brand-new apartments I had come from, “and look where I live. I have five children and all of them eat three meals a day and sleep with a roof over their head. All of them go to school, come home, and they play with their friends, because they have friends, and my children are happy. I go to work and we always get by, and look where we live, and look where you live. Money is no reason to keep you from having children, you will get by if you want to.

Somewhere in the middle of his lesson I paused to ‘splain that, even though we lived in a nice apartment, we had stumbled upon an irregular deal and still had no money, but my argument made his point all the more. I do not know where that Mexican’s relationship with God was, but he told me that God would take care of me and my family. Before we were done, I was deeply moved, made humble, and had a new way of thinking.

That night I crossed the little Brushy Creek waterfall dam after playing Mexican basketball, I walked into our apartment kitchen where Casey was, and I told her all about it. I told Casey that I thought it was time for us to worry about things differently, and that we should start having children. Seven months later, we had our firstborn son, David. Seven months? Well, that is another story.